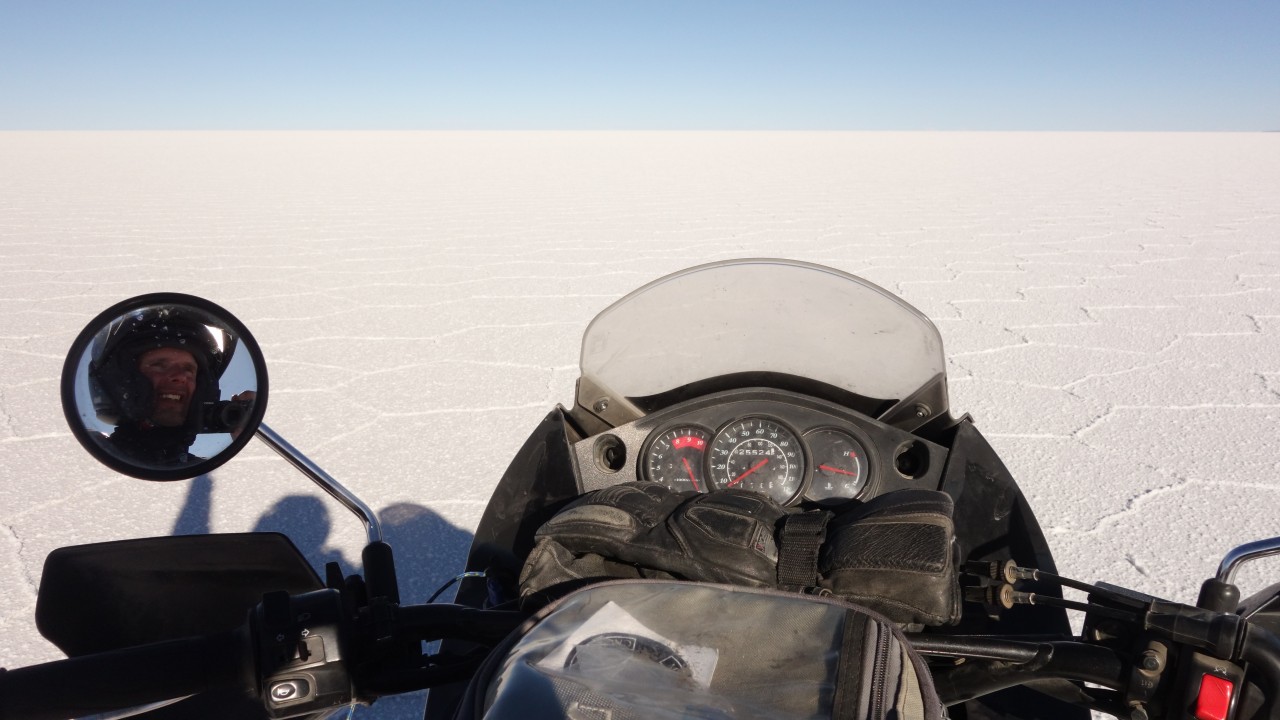 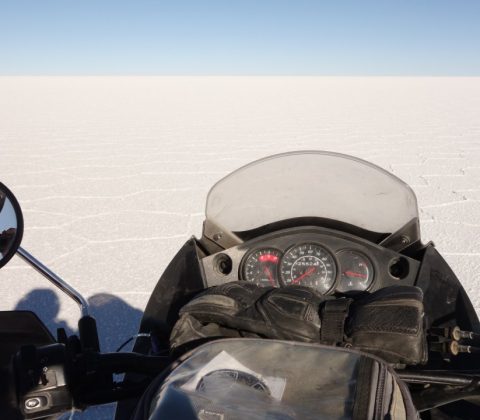 So I am sitting here with my hotel complementary breakfast, and don’t quite know what to make of it. 1 white bun, a couple of crackers, butter, jam, warm milk, and juice. Not much for a tall Dane to go on.

1 white bun, a couple of crackers, butter, jam, warm milk, and juice. Not much for a tall Dane to go on. Oh well…

But wait… why are you on a hotel?

Well… the climate here in southern Bolivia (Oruro, to be exact) is not quite friendly for camping. I had been looking at weather graphs when I was back in Denmark and thought, well… just drive a bit more north, and you can have the weather you want. Well… The day-time temperatures are 15-20 degrees (I think) which is quite good 🙂 But the sun is very strong. I am using sunscreen factor 50 – and still my skin (mainly face / lips) is having a difficult time. Not just the sun, but also the dry air and wind (when you are driving) really dries out your skin. At night, the temperatures falls to -10 +/- degrees… No bueno with my camping gear.

Then why not a cheaper hostel? Hm… they are a bit difficult to find in a non-tourist-oriented city, also taking into consideration that I would like a (secure) parking space for my bike.

Then why not couch surfing? Turns out, it is difficult to search for hosts while being out in Salar de Uyuni without internet 😉 But hey… I also get this complementary view of Oruro from the hotel restaurant: Complementary view of Oruro from the hotel restaurant.

And speaking of Salar de Uyuni, I took my chances and drove through the salt desert on my own. I had been a bit worried, though, because when I was staying in Ollargüe (border-city in Chile) 2 groups of bikers came driving south from Bolivia to Chile, and I saw my chances to get some intel from them 🙂 Friendly and helpful, but also a bit disconcerting when the (most often asked) question is put out there:

Other biker: So you are traveling on your own?
Me: Yes 😀

… followed by looks of worry and concern.

You take good care of yourself!

Yes… same well-meaning(!) advice as I got back home in Denmark – a little more worrisome when it comes from a fellow traveler, along with explanations of quick salt (like quick sand, just with salt) and stories about travelers dying out there because they got lost and got caught in -20 degrees.

If, by 4 o clock, you cannot see your end destination, turn around and go back where you came from.

He relaxes a bit more, when he learns that I got a GPS 🙂 But then again… when he realizes it is my phone in my hand that is my GPS, his eye brows raises skeptically once again…

Find somebody – another biker or car – to drive after out in the desert. That way you will avoid the quick salt. Or better yet, find a local guide to drive with you.

So… I play it safe and drive to Uyuni (the city) instead of going directly out in the desert, thinking I might just take a guided-tour – you know… the touristy kind of thing… 7 Europeans crammed into a 4×4 with a Castellano1 speaking only guide racing through all the sights as fast as possible. Also, I needed to get a SOAT2 which I (of course) forgot to buy at the border.

Uyuni is filled with backpackers as well as cafés and restaurants and tour companies catering for the same. Also, Abogados (lawyers) on every street corner. Don’t know why they need so many lawyers in such a small town!?!?!? Anyway… If you like to hang out with other backpackers, eating pizza or Mexican tortillas in nice cafés (with wifi), drinking beer (all of which are very good things to pass your time with) then yes, Uyuni is a great place. If you just want to get your SOAT, then you are told to go to Potosi or Oruro. They don’t even question how you get there with your bike… I mean, driving around without a (mandatory) insurance!?!?3

So I take a quick decision, and the next morning I head for the salt desert: The first stop a few km into the salar is the Ojos del Salar; water holes at the edge of the salar, where fresh water is pushed up from underground. I keep my bike at a distance (along with the other cars) while I think of the well-meaning advice of quick salt. Also, can’t help but laugh a bit at the tourists making funny pictures a few 50m away: All the tourists making funny photos 🙂

When I drove into the desert, I just happened to stumble into a fellow biker from Argentina. I follow him out into the white, since he seems to know where to go – and yes… the next stop is where I get my tourist photo 😀 Dakar 2016 was marketed heavily in Uyuni.

After that, the Argentinian biker and I say goodbye (he wants to head south; the salar was just a quick tourist thing for him) and I dot in a spot on my GPS marked as a “Cave entrance”. When I get there, it turns out it is one of the islands in the desert (of course) and I go exploring on the island: I explored this island from the other side – hiking up a bit. It was only when I got down again (at a slightly different spot) I noticed the do-not-enter sign. Then I drove to the other side of the island, and saw the tourist-establishment…

Apparently the access to the island is restricted to specific paths and, of course, there is an entrance fee. Oh well…

I also ran into a couple of backpackers that told me they were going to camp in the cave. Cool! I want to join 🙂 But I chickened out… the thought of (possible) -20 degrees in the night did not seem pleasant. And it also seemed a bit too forward to ask the girls if I could cuddle with them during the night 😉 Instead, the next morning when I woke up in my hostel and walked out to my bike to find my water bottle filled with ice, I sent them a warm thought. Hope they had a good night. In Calama, I made preparations to go to Bolivia and Peru by buying 2 x 4L of gas canisters. Although, so far, I have had no problems, rumors have it that it might become difficult to get (good) gasoline in some of these parts. Anyway… it just leveled-up my never-ending game of Tetris-packing my gear: On the way from Calama to Ollagüe, you will also find a green canyon in the middle of the desert. The water comes down from the mountains, and the locals use it to make it a nice place to live: Green canyon in the middle of the desert.

And as a final note, I think I need to make it a bit up again for the dogs. In a previous post I ranted on about dogs and their tendency to chase me (and other bikers) while driving. While the problem has not completely gone away, it seems that my worst experiences with this were to be found in the southern part of Chile (Chiloé and Coyhaique). So when I met this dog in a hostel, I just had to take a photo. A dog after my heart: It is evening now (yes… time traveling is easy on the net 😉 ) and I have been walking a bit around the city. I just thought I would share a few impressions with you – while I still (?) have your attention…

First of all, the air is dirty. My friends in Denmark know that one of my complaints with Copenhagen is that the air is polluted. And it is! But this is 10 times worse. The car park is very old (cars, vans, buses alike) and they crowd the streets all day, moving around slowly, polluting the air. From time to time you will see a (relatively) new Suzuki Swift (or the like), but most often, the car looks like something that rent-a-wreck would have given up years ago.

But it is a very quiet city. People get in and out of the collectivos5 all the time, and cars waiting behind most often waits with patience. Sometimes, though, they will honk their horn. But not an Italian style hoooooooooooooooooooooonk-I-want-to-move-forward-now kind of honk, but more a small and shy I-almost-did-not-touch-my-horn honk.

That and the fairs. The fairs are great. They are anywhere, and in places where you have a street wide enough to support two lanes of cars in each direction, at least one lane and the sidewalk is covered with stalls and individuals selling everything. I repeat everything. You can get everything you want – as long as it is cheap! But in relation to the quiet city, it is worth mentioning that they do not shout out peddling their goods. Occasionally one will have a microphone and a speaker, or some shop will play loud music, but most of the time, the local people just sits back and lets the potential customers walk by without shouting them down. Me gusta. Me gusta mucho 🙂 Of course, if you pay interest in their goods, they will be attentive 🙂

The down side is that it is difficult to get a good photo of the fairs. Partly because they are so compact. But more because the local (indigenous) people most often do not like people taking photos of them. And I mostly don’t feel comfortable taking photos of people – so this is the best shot I dared to take today: I love the markets and the local people in their indigenous outfit. Unfortunately it is difficult to catch a good photo of the colourfulness of the markets – not least because most indigenous people don’t really like being taking photos of.

Other impressions… I mentioned above that Uyuni got loads of abogados. Turns out… Uyuni is not the only one. In this street there were 10(!) abogados side by side. Again, don’t quite know why, but perhaps it is a sign that the Bolivians love their paper works as much as their Chileans neighbors 🙂 Another oddity… Take a look at this photo: Sometimes you spot some oddities… like this police woman… she is wearing high heels. Somehow that does not seem practical…

I did not dare to take a photo while she was close – her being a police woman and all – but I hope you spotted that she is actually wearing high heels. Somehow that does not seem right, considering her line of work.

Another little thing. We are all familiar with the concept that sex sells. Sex is used widely in the western marketing culture – but still… this surprised me a bit. Sex sells public toilets… Let me end this long long post with a nice photo from one of the squares in the city: Oruro by night. Looks like something that would attract tourists – but not many tourists in this town (at least in June).

If you got this far, then thank you for reading. Hope you liked it. If you just skipped down to the photo album… No worries. No hard feelings 🙂