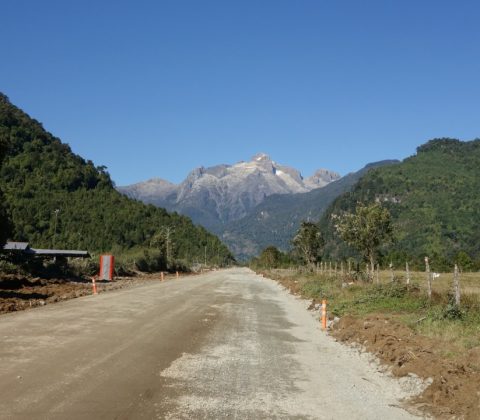 Writing my last post, I had just dissed the ferry from Quellon (Chiloé) to Chaitén (on the mainland) because the timetable was kind of inconvenient and I thought I could drive around almost just as fast myself. Well… guess what… that did not happen 😮 Partly due to other ferries, partly due to Chile introducing gravel roads 😮 But… it was a good choice none the less, because basically from Puerto Monnt (where I updated my blog last) and downwards, the landscape just kept getting more and more beautiful and interesting1.

On the way south I have also started to meet the first other biker companions. First I met Horacio and we kind of formed a need-friendship; we were both looking for solutions to the, hm… challenging ferry timetables, and he seemed almost as challenged by the dirt roads as I felt. On the other hand, the language barrier (he knew less English than my poor Spanish) made it difficult to have a fluent conversation. But practice makes better… 🙂

Later, in Coyhaique, I had an appointment to stay with Patty and Fabian (couch surfing). They live in a small (50m2) house divided into 3 rooms. It had been raining all day and I had been looking forward to spread my things out to get them dry. The house seemed a little compact, but I thought it would be ok. Then to my surprise Fabian announced that they had also accepted 3 other guests as a last minute request. I felt a little panic for my plan to go awash. How would we manage 6 persons (4 of us wet and with motorcycle gear) in this small house? But all went really well, and we all stayed there 3 nights 🙂

At the moment, I am sharing a cabaña with 3 Spanish travelers – also on motorbikes. I met them on the way to Puerto Tranquillo (where I am now) and we went on a small sight-seeing trip together to see some marble caves. Beautiful. But this time I let the language barrier sit, and stuffed myself away with my computer and blog update. It seemed a bit more relaxing than trying to learn more Spanish right now 😮

Tomorrow I will drive towards the Argentinian border. Just before the border there is a city named Chile Chico. Perhaps I will stay there a day, perhaps I will just go into Argentina and see what the fuss is about2 😉